My buddy Tysto, from Tysto Commentaries joins me again to celebrate the release of a new Lost in Space show on Netflix. Which only one of us have actually watched. However, we did both watch a 2004 pilot directed by John Woo. We talk about how it compares to the original show (which Tysto has seen more of than me) and the 1998 film (which he hasn't seen, but I have), I say catcher's matt instead of mitt and we wonder just where the heck Dr. Smith is. We've looked everywhere, even under the bed, he ain't there. . The pilot is available on Youtube and only in 5 parts, which is a tad annoying, sorry. 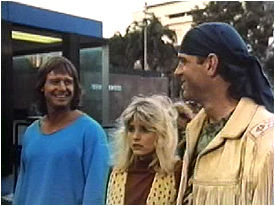 Professional magician and wrestling fan Leigh Milne joins me to chat about the actually not bad action comedy drama pilot Tag Team. It stars Jesse Ventura and Roddy Piper as disgraced wrestlers who decide to become police officers. We talk about the likability of the stars, why the show was cancelled and ponder what happened to the dogs. Warning: contains not one but TWO genuine Scottish accents. We try our very best to reign them in. Oh and this episode was plagued by audio problems. I have fixed them but there may still be a rustling sound on occasion as Leigh was using his phone to talk to me.