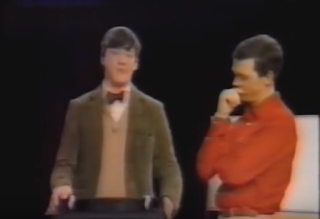 Alex and Nick from the Release the Clowns Podcast join me for the first time to discuss a BBC pilot written by and starring Stephen Fry and Hugh Laurie. We discuss British comedy ,the cast and ponder Hugh Laurie's American accent. It was a fun recording but there are slight audio issues because Skype wasn't playing ball. I have better Skype calls with people across the pond from me, but when they're in the same country... Contains mild language and the use of discriminatory language in context of a show from the 1970s.

Listen to "Drop The Pilot Podcast" on Spreaker.
View the pilot on Youtube
on December 09, 2019