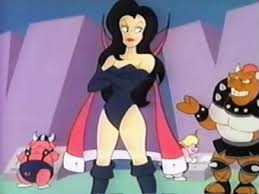 Owen returns to chat about an animated pilot, Battletoads, based on a video game. A game that Owen has played and that I barely knew existed. We talk about, generally, the extreme laziness of the whole thing from the poor animation to the bored voice actors. Also, S&M outfits and phallic shaped towers in a kid's cartoon. The pilot is available on Youtube, officially by the company that now owns DiC properties (link below).