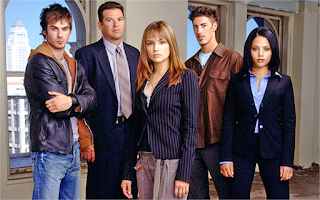 John Pavlich returns to chat about the not entirely awful proposed WB series from 2004, Fearless. Based on the book series by the writer of Sweet Valley High this action drama tells the story of an FBI agent who doesn't have the fear gene. We talk about the cast, the coolness of the actual concept and how they are doing it wrong and contemplate why the show was pulled. You see, it was actually advertised on TV and on DVD releases of other shows (Smallville), had an actual day it was supposed to air and genuine cast photos like the one above. Better than the snapshots from VHS rips, like other shows I've covered, eh? Don't worry, that will return next time..... Oh, by the way, on top of the many things I probably get wrong in this episode, the most important one is me stating that the show is based on the spin-off of the books. Those books, Fearless FBI do exist but were published after this show would have aired, so they may actually have been more of a tie-in. Oopsie.
on March 07, 2018